Numerous academic studies have highlighted the significant differences in the ways that young people access, use and engage with the Internet and the implications it has in their lives. While the majority of young people have some form of access to the Internet, for some their connections are sporadic, dependent on credit on their phones, an available library, or Wi-Fi open to the public. Qualitative data in a variety of countries has shown such limited forms of access can create difficulties for these young people as an Internet connection becomes essential for socialising, accessing public services, saving money, and learning at school.

While the UK government has financed technological infrastructure and invested in schemes to address digital inequalities, the outcomes of these schemes are rarely uniformly positive or transformative for the people involved. This gap between expectation and reality demands theoretical attention; with more attention placed on the cultural, political and economic contexts of the digitally excluded, and the various attempts to “include” them.

Focusing on a two-year digital inclusion scheme for 30 teenagers and their families initiated by a local council in England, a qualitative study by Huw C. Davies, Rebecca Eynon, and Sarah Wilkin analyses why, despite the good intentions of the scheme’s stakeholders, it fell short of its ambitions. It also explains how the neoliberalist systems of governance that are increasingly shaping the cultures and behaviours of Internet service providers and schools — that incentivise action that is counterproductive to addressing digital inequality and practices — cannot solve the problems they create.

We caught up with the authors to discuss the study’s findings:

Ed.: It was estimated that around 10% of 13 year olds in the study area lacked dependable access to the Internet, and had no laptop or PC at home. How does this impact educational outcomes?

Huw: It’s impossible to disaggregate technology from everything else that can affect a young person’s progress through school. However, one school in our study had transferred all its homework and assessments online while the other schools were progressing to this model. The students we worked with said doing research for homework is synonymous with using Google or Wikipedia, and it’s the norm to send homework and coursework to teachers by email, upload it to Virtual Learning Environments, or print it out at home. Therefore students who don’t have access to the Internet have to spend time and effort finding work-arounds such as using public libraries. Lack of access also excludes such students from casual learning from resources online or pursuing their own interests in their own time.

Ed.: The digital inclusion scheme was designed as a collaboration between a local council in England (who provided Internet services) and schools (who managed the scheme) in order to test the effect of providing home Internet access on educational outcomes in the area. What was your own involvement, as researchers?

Huw: Initially, we were the project’s expert consultants: we were there to offer advice, guidance and training to teachers and assess the project’s efficacy on its conclusion. However, as it progressed we took on the responsibility of providing skills training to the scheme’s students and technical support to their families. When it came to assessing the scheme, by interviewing young people and their families at their homes, we were therefore able to draw on our working knowledge of each family’s circumstances.

Ed.: What was the outcome of the digital inclusion project —- i.e. was it “successful”?

Huw: As we discuss in the article, defining success in these kinds of schemes is difficult. Subconsciously many people involved in these kinds of schemes expect technology to be transformative for the young people involved yet in reality the changes you see are more nuanced and subtle. Some of the scheme’s young people found apprenticeships or college courses, taught themselves new skills, used social networks for the first time and spoke to friends and relatives abroad by video for free. These success stories definitely made the scheme worthwhile. However, despite the significant good will of the schools, local council, and the families to make the scheme a success there were also frustrations and problems. In the article we talk about these problems and argue that the challenges the scheme encountered are not just practical issues to be resolved, but are systemic issues that need to be explicitly recognised in future schemes of this kind.

Ed.: And in the article you use neoliberalism as a frame to discuss these issues..?

Huw: Yes. But we recognise in the article that this is a concept that needs to be used with care. It’s often used pejoratively and/or imprecisely. We have taken it to mean a set of guiding principles that are intended to produce a better quality of services through competition, targets, results, incentives and penalties. The logic of these principles, we argue, influences they way organisations treat individual users of their services.

For example, for Internet Service Providers (ISPs) the logic of neoliberalism is to subcontract out the constituent parts of an overall service provision to create mini internal markets that (in theory) promote efficiency through competition. Yet this logic only really works if everyone comes to the market with similar resources and abilities to make choices. If their customers are well informed and wealthy enough to remind companies that they can take their business elsewhere these companies will have a strong incentive to improve their services and reduce their costs. If customers are disempowered by lack of choice the logic of neoliberalism tends to marginalise or ignore their needs. These were low-income families with little or no experience of exercising consumer choice and rights. For them therefore these mini markets didn’t work.

In the schools we worked with the logic of neoliberalism meant staff and students felt under pressure to meet certain targets — they all had to priortise things that were measured and measurable. Failure to meet these targets would then mean they would have to account for what went wrong, face losing out on a reward or they would expect disciplinary action. It therefore becomes much more difficult for schools to devote time and energy to schemes such as this.

Ed.: Were there any obvious lessons that might lead to a better outcome if the scheme were to be repeated: or are the (social, economic, political) problems just too intractable, and therefore too difficult and expensive to sort out?

Huw: Many of the families told us that access to the Internet was becoming evermore vital. This was not just for homework but also for access to public and health services (that are being increasingly delivered online) and getting to the best deals online for consumer services. They often told us therefore that they would do whatever it took to keep their connection after the two-year scheme ended. This often meant paying for broadband out of their social security benefits or income that was too low to be taxable: income that could otherwise have been spent on, for example, food and clothing. Given its necessity, we should have a national conversation about providing this service to low income families for free.

Ed.: Some of the families included in the study could be considered “hard to reach”. What were your experiences of working with them?

Huw: There are many practical and ethical issues to address before these sorts of schemes can begin. These families often face multiple intersecting problems that involve many agencies (who don’t necessarily communicate with each other) intervening in their lives. For example, some of the scheme’s families were dealing with mental illness, disability, poor housing, and debt all at the same time. It is important that such schemes are set up with an awareness of this complexity. We are very grateful to the families that took part in the scheme and the insights they gave us for how such schemes should run in the future.

Ed.: Finally, how do your findings inform all the studies showing that “digital inclusion schemes are rarely uniformly positive or transformative for the people involved”. Are these studies gradually leading to improved knowledge (and better policy intervention), or simply showing the extent of the problem without necessarily offering “solutions”?

Huw: We have tried to put this scheme into a broader context to show such policy interventions have to be much more ambitious, intelligent, and holistic. We never assumed digital inequality is an isolated problem that can be fixed with a free broadband connection, but when people are unable to afford the Internet it is an indication of other forms of disadvantage that, in a sympathetic and coordinated way, have to be addressed simultaneously. Hopefully, we have contributed to the growing awareness that such attempts to ameliorate the symptoms may offer some relief but should never be considered a cure in itself.

The article is an output of the project “Tackling Digital Inequality Amongst Young People: The Home Internet Access Initiative“, funded by Google. 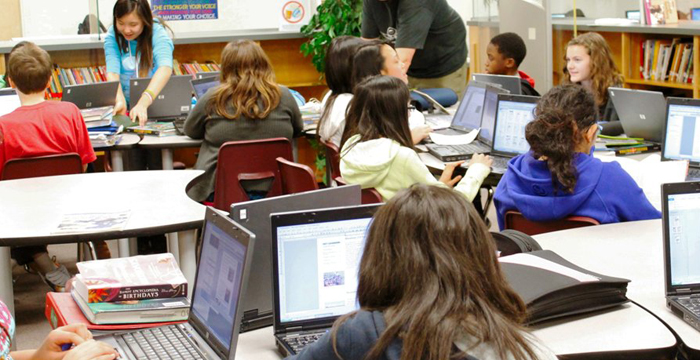 Young people are the most likely to take action to protect...