As Laura Bates, founder of the Everyday Sexism project, has recently highlighted, “it seems to be increasingly difficult to talk about sexism, equality, and women’s rights” (Everyday Sexism Project, 2015). With many theorists suggesting that we have entered a so-called “post-feminist” era in which gender equality has been achieved (cf. McRobbie, 2008; Modleski, 1991), to complain about sexism not only risks being labelled as “uptight”, “prudish”, or a “militant feminist”, but also exposes those who speak out to sustained, and at times vicious, personal attacks (Everyday Sexism Project, 2015). Despite this, thousands of women are speaking out, through Bates’ project, about their experiences of everyday sexism. Our research seeks to draw on the rich history of gender studies in the social sciences, coupling it with emerging computational methods for topic modelling, to better understand the content of reports to the Everyday Sexism Project and the lived experiences of those who post them. Here, we outline the literature which contextualizes our study.

Studies on sexism are far from new. Indeed, particularly amongst feminist theorists and sociologists, the analysis (and deconstruction) of “inequality based on sex or gender categorization” (Harper, 2008) has formed a central tenet of both academic inquiry and a radical politics of female emancipation for several decades (De Beauvoir, 1949; Friedan, 1963; Rubin, 1975; Millett, 1971). Reflecting its feminist origins, historical research on sexism has broadly focused on defining sexist interactions (cf. Glick and Fiske, 1997) and on highlighting the problematic, biologically rooted ‘gender roles’ that form the foundation of inequality between men and women (Millett, 1971; Renzetti and Curran, 1992; Chodorow, 1995).

More recent studies, particularly in the field of psychology, have shifted the focus away from whether and how sexism exists, towards an examination of the psychological, personal, and social implications that sexist incidents have for the women who experience them. As such, theorists such as Matteson and Moradi (2005), Swim et al (2001) and Jost and Kay (2005) have highlighted the damaging intellectual and mental health outcomes for women who are subject to continual experiences of sexism. Atwood, for example, argues in her study of gender bias in families, that sexism combines with other life stressors to create significant psychological distress in women, resulting in them needing to “seek therapy, most commonly for depression and anxiety” (2001, 169).

Given its increasing ubiquity in every day life, it is hardly surprising that the relationship between technology and sexism has also sparked interest from contemporary researchers in the field. Indeed, several studies have explored the intersection between gender and power online, with Susan Herring’s work on gender differences in computer-mediated communication being of particular note (cf. Herring, 2008). Theorists such as Mindi D. Foster have focused on the impact that using digital technology, and particularly Web 2.0 technologies, to talk about sexism can have on women’s well being. Foster’s study found that when women tweeted about sexism, and in particular when they used tweets to a) name the problem, b) criticise it, or c) to suggest change, they viewed their actions as effective and had enhanced life satisfaction, and therefore felt empowered (Foster, 2015: 21).

Despite this diversity of research on sexism, however, there remain some notable gaps in understanding. In particular, as this study hopes to highlight, little previous research on sexism has considered the different ‘types’ of sexism experienced by women (beyond an identification of the workplace and the education system as contexts in which sexism often manifests as per Barnett, 2005; Watkins et al., 2006; Klein, 1992). Furthermore, research focusing on sexism has thus far been largely qualitative in nature. Although a small number of studies have employed quantitative methods (cf. Brandt 2011; Becker and Wright, 2011), none have used computational approaches to analyse the wealth of available online data on sexism.

This project, which will apply a natural language processing approach to analyse data collected from the Everyday Sexism Project website, seeks to fill such a gap. By providing much needed analysis of a large-scale crowd sourced data set on sexism, it is our hope that knowledge gained from this study will advance both the sociological understanding of women’s lived experiences of sexism, and methodological understandings of the suitability of computational topic modelling for conducting this kind of research.

Find out more about the OII’s research on the Everyday Sexism project by visiting the webpage or by looking at the other Policy & Internet blog posts on the project – post 1 and post 2.

Taha Yasseri is a Research Fellow at the OII who has interests in analysis of Big Data to understand human dynamics, government-society interactions, mass collaboration, and opinion dynamics.

Kathryn Eccles is a Research Fellow at the OII who has research interests in the impact of new technologies on scholarly behaviour and research, particularly in the Humanities.

Sophie Melville is a Research Assistant working at the OII. She previously completed the MSc in the Social Science of the Internet at the OII.

Rubin, Gayle. (1975). The traffic in women: notes on the “political economy” of sex. In Rayna R. Reiter (ed.), Toward and anthropology of women. Monthly Review Press. 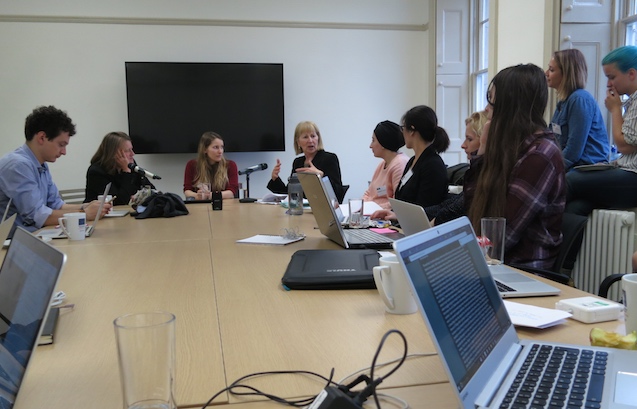 “If you’re on Twitter then you’re asking for it” — responses...