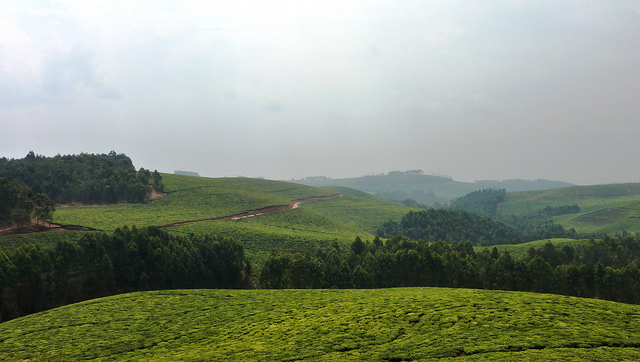 Production of export commodity goods like tea, coffee and chocolate is an important contributor to economies in Africa. Producers sell their goods into international markets, with the final products being sold in supermarkets, here in the UK and throughout the world. So what role is new Internet connectivity playing in changing these sectors — which are often seen as slow to adopt new technologies? As part of our work examining the impacts of growing Internet connectivity and new digital ICTs in East Africa we explored uses of the Internet and ICTs in the tea sector in Rwanda.

Tea is a sector with well-established practices and relations in the region, so we were curious if ICT might be changing it. Of course, one cannot ignore the movements of material goods when you research the tea sector. Tea is Rwanda’s main export by value, and in 2012 it moved over 21,000 tonnes of tea, accruing around $56m in value. During our fieldwork we interviewed cooperatives in remote offices surrounded by tea plantations in the temperate Southern highlands, tea processors in noisy tea factories heavy with the overpowering smell of fermenting tea leaves, and tea buyers and sellers surrounded by corridors piled high with sacks of tea.

But behind the material movement that takes tea from the slopes of Rwanda’s ‘thousand hills’ to a box on a shelf in Tesco, is a growing set of less visible digital data flows. Whilst the adoption of digital technologies is not comprehensive in the Rwandan tea sector (with, for example, very low Internet use among tea growers), we did find growing use of the Internet and ICTs. More importantly, where they were present, digital flows of information (such as tea-batch tracking, logistics and sales prices) were increasingly important to the ability of firms to improve production and ultimately to increase their profit share from tea. We have termed this a ‘data-driven value chain’ to highlight that these new digital information flows are becoming as important as the flows of material goods.

So why is tea production becoming increasingly ‘data-driven’? We found two principal drivers at work. Firstly, production of commodities like tea has shifted to private ownership. In Rwanda, tea processing factories are no longer owned by the government (as they were a decade ago) but by private firms, including several multinational tea firms. Prices for buying and selling tea are also no longer fixed by the government, but depend on the market — flat rate prices stopped at the end of 2012. Data on everything from international prices, tea quality and logistics has become increasingly important as Rwandan tea firms look to be part of the global market, by better coordinating production and improving the prices of their tea. For instance, privately owned tea factories (often in remote locations) connect via satellite or microwave Internet links to head offices, and systems integration allows multi-national tea firms the ability to track and monitor production at the touch of a button.

Secondly, we need to understand new product innovation in the tea sector. In recent years new products have particularly revolved around growing demand in the retail market for differentiated products — such as ‘environmental’, fair trade or high quality teas — for which the consumer is willing to pay more. This relates most obviously to the activities in the fields and tea processors, but digital information is also crucial in order to allow for ‘traceability’ of tea. As this guarantees that tea batches have satisfied conditions around location, food safety, chemical use, fair labour (etc.) a key component of new product innovation is therefore data — because it is integral to firms’ abilities to prove their value-added production or methods.

The idea of agricultural value chains — of analysing agricultural production from the perspective of a fragmented network of interconnected firms — has become increasingly influential in strategies and policy making supported by large donors such as the World Bank and the International Fund for Agriculture Development (IFAD), an agency of the UN.

These value chain approaches explore the amount of economic ‘value’ that different actors in the supply chain are able to capture in production. For instance, Rwandan tea farmers are only able to capture very small proportions of the final retail prices — we estimate they are paid less than 6% of the cost of the eventual retail product, and only 22% of the cost of the raw tea that is sold to retailers. Value chain analysis has been popular for policy makers and donors in that it helps them to formulate policies to support how firms in countries like Rwanda improve their value through innovation, improving processes of production, or reaching new customers.

Yet, at the moment it appears that the types of analysis being done by policy makers and donors pay very little attention to the importance of digital data, and so they are presenting an unclear picture of the ways to improve — with a tendency to focus on material matters such as machinery or business models.

Our research particularly highlighted the importance of considering how to adapt digital data flows. The ways that digital information is codified, digitised and accessed can be exclusionary, reducing the ability for smaller actors in Rwanda to compete. For instance, we found that lack of access to clear information about prices, tea quality and wider market information means that smallholders, small processors and cooperatives may not compete as well as they could, or be missing on wider innovations in tea production.

While we have focused here only on tea production, our discussions with those working in other agricultural sectors — and in other countries — suggest that our observations have significance across other agricultural sectors. In agricultural production, strategy, policy and researchers mainly focus on the material elements of production — those which are more visible and quantifiable. However, we suggest that often underlying such actions is a growing layer of digital data activity. It is only through more coherent analysis of the role of digital technologies and data that we can better analyse production — and build appropriate policy and strategies to support commodity producers in sectors like Rwandan tea.

Chris Foster is a researcher at the Oxford Internet Institute. His research focus is on technologies and innovation in developing and emerging markets, with a particular interest on how ICTs can support development of low income groups.

New Report: Risks and Rewards of Online Gig Work at the...