Ed: How did you construct your quantitative measure of ‘conflict’? Did you go beyond just looking at content flagged by editors as controversial?

Taha: Yes we did … actually, we have shown that controversy measures based on “controversial” flags are not inclusive at all and although they might have high precision, they have very low recall. Instead, we constructed an automated algorithm to locate and quantify the editorial wars taking place on the Wikipedia platform. Our algorithm is based on reversions, i.e. when editors undo each other’s contributions. We focused specifically on mutual reverts between pairs of editors and we assigned a maturity score to each editor, based on the total volume of their previous contributions. While counting the mutual reverts, we used more weight for those ones committed by/on editors with higher maturity scores; as a revert between two experienced editors indicates a more serious problem. We always validated our method and compared it with other methods, using human judgement on a random selection of articles.

Ed: Was there any discrepancy between the content deemed controversial by your own quantitative measure, and what the editors themselves had flagged?

Taha: We were able to capture all the flagged content, but not all the articles found to be controversial by our method are flagged. And when you check the editorial history of those articles, you soon realise that they are indeed controversial but for some reason have not been flagged. It’s worth mentioning that the flagging process is not very well implemented in smaller language editions of Wikipedia. Even if the controversy is detected and flagged in English Wikipedia, it might not be in the smaller language editions. Our model is of course independent of the size and editorial conventions of different language editions.

Ed: Were there any differences in the way conflicts arose / were resolved in the different language versions?

Taha: We found the main differences to be the topics of controversial articles. Although some topics are globally debated, like religion and politics, there are many topics which are controversial only in a single language edition. This reflects the local preferences and importances assigned to topics by different editorial communities. And then the way editorial wars initiate and more importantly fade to consensus is also different in different language editions. In some languages moderators interfere very soon, while in others the war might go on for a long time without any moderation.

Ed: In general, what were the most controversial topics in each language? And overall?

Taha: Generally, religion, politics, and geographical places like countries and cities (sometimes even villages) are the topics of debates. But each language edition has also its own focus, for example football in Spanish and Portuguese, animations and TV series in Chinese and Japanese, sex and gender-related topics in Czech, and Science and Technology related topics in French Wikipedia are very often behind editing wars.

Ed: What other quantitative studies of this sort of conflict -ie over knowledge and points of view- are there?

Taha: My favourite work is one by researchers from Barcelona Media Lab. In their paper Jointly They Edit: Examining the Impact of Community Identification on Political Interaction in Wikipedia they provide quantitative evidence that editors interested in political topics identify themselves more significantly as Wikipedians than as political activists, even though they try hard to reflect their opinions and political orientations in the articles they contribute to. And I think that’s the key issue here. While there are lots of debates and editorial wars between editors, at the end what really counts for most of them is Wikipedia as a whole project, and the concept of shared knowledge. It might explain how Wikipedia really works despite all the diversity among its editors.

Ed: How would you like to extend this work?

Taha: Of course some of the controversial topics change over time. While Jesus might stay a controversial figure for a long time, I’m sure the article on President (W) Bush will soon reach a consensus and most likely disappear from the list of the most controversial articles. In the current study we examined the aggregated data from the inception of each Wikipedia-edition up to March 2010. One possible extension that we are working on now is to study the dynamics of these controversy-lists and the positions of topics in them.

Read the full paper: Yasseri, T., Spoerri, A., Graham, M. and Kertész, J. (2014) The most controversial topics in Wikipedia: A multilingual and geographical analysis. In: P.Fichman and N.Hara (eds) Global Wikipedia: International and cross-cultural issues in online collaboration. Scarecrow Press. 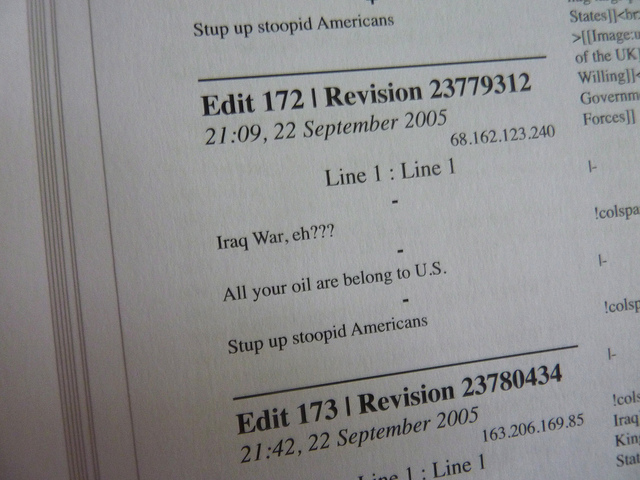