The information provided in the traditional media is of fundamental importance for the policy-making process, signalling which issues are gaining traction, which are falling out of favour, and introducing entirely new problems for the public to digest. But the monopoly of the traditional media as a vehicle for disseminating information about the policy agenda is being superseded by social media, with Twitter in particular used by politicians to influence traditional news content.

In their Policy & Internet article, “Politicians and the Policy Agenda: Does Use of Twitter by the U.S. Congress Direct New York Times Content?” Matthew A. Shapiro and Libby Hemphill examine the extent to which he traditional media is influenced by politicians’ Twitter posts. They draw on indexing theory, which states that media coverage and framing of key policy issues will tend to track elite debate. To understand why the newspaper covers an issue and predict the daily New York Times content, it is modelled as a function of all of the previous day’s policy issue areas as well as all of the previous day’s Twitter posts about all of the policy issue areas by Democrats and Republicans.

They ask to what extent are the agenda-setting efforts of members of Congress acknowledged by the traditional media; what, if any, the advantages are for one party over the other, measured by the traditional media’s increased attention; and whether there is any variance across different policy issue areas? They find that Twitter is a legitimate political communication vehicle for US officials, that journalists consider Twitter when crafting their coverage, and that Twitter-based announcements by members of Congress are a valid substitute for the traditional communiqué in journalism, particularly for issues related to immigration and marginalized groups, and issues related to the economy and health care.

Ed.: Can you give a quick outline of media indexing theory? Does it basically say that the press reports whatever the elite are talking about? (i.e. that press coverage can be thought of as a simple index, which tracks the many conversations that make up elite debate).

Matthew: Indexing theory, in brief, states that the content of media reports reflects the degree to which elites – politicians and leaders in government in particular – are in agreement or disagreement. The greater the level of agreement or consensus among elites, the less news there is to report in terms of elite conflict. This is not to say that a consensus among elites is not newsworthy; indexing theory conveys how media reporting is a function of the multiple voices that exist when there is elite debate.

Ed.: You say Twitter seemed a valid measure of news indexing (i.e. coverage) for at least some topics. Could it be that the NYT isn’t following Twitter so much as Twitter (and the NYT) are both following something else, i.e. floor debates, releases, etc.?

Matthew: We can’t test for whether the NYT is following Twitter rather than floor debates/press releases without collecting data for the latter. Perhaps If the House and Senate Press Galleries are indexing the news based on House and Senate debates, and if Twitter posts by members of Congress reflect the House and Senate discussions, we could still argue that Twitter remains significant because there are no limits on the amount of discussion – i.e. the boundaries of the House and Senate floors no longer exist – and the media are increasingly reliant on politicians’ use of Twitter to communicate to the press. In any case, the existing research shows that journalists are increasingly relying on Twitter posts for updates from elites.

Ed.: I’m guessing that indexing theory only really works for non-partisan media that follow elite debates, like the NYT? Or does it also work for tabloids? And what about things like Breitbart (and its ilk) .. which I’m guessing appeals explicitly to a populist audience, rather than particularly caring what the elite are talking about?

Matthew: If a study similar to our was done to examine the indexing tendencies of tabloids, Breitbart, or a similar type of media source, the first step would be to determine what is being discussed regularly in these outlets. Assuming, for example, that there isn’t much discussion about marginalized groups in Breitbart, in the context of indexing theory it would not be relevant to examine the pool of congressional Twitter posts mentioning marginalized groups. Those posts are effectively off of Breitbart’s radar. But, generally, indexing theory breaks down if partisanship and bias drive the reporting.

Ed.: Is there any sense in which Trump’s “Twitter diplomacy” has overturned or rendered moot the recent literature on political uses of Twitter? We now have a case where a single (personal) Twitter account can upset the stock market — how does one theorise that?

Matthew: In terms of indexing theory, we could argue that Trump’s Twitter posts themselves generate a response from Democrats and Republicans in Congress and thus muddy the waters by conflating policy issues with other issues like his personality, ties to Russia, his fact-checking problems, etc. This is well beyond our focus in the article, but we speculate that Trump’s early-dawn use of Twitter is primarily for marketing, damage control, and deflection. There are really many different ways to study this phenomenon. One could, for example, examine the function of unfiltered news from politician to the public and compare it with the news that is simultaneously reported in the media. We would also be interested in understanding why Trump and politicians like Trump frame their Twitter posts the way they do, what effect these posts have on their devoted followers as well as their fence-sitting followers, and how this mobilizes Congress both online (i.e. on Twitter) and when discussing and voting on policy options on the Senate and House floors. These areas of research would all build upon rather than render moot the extant literature on the political uses of Twitter.

Ed.: Following on: how does Indexing theory deal with Trump’s populism (i.e. avowedly anti-Washington position), hatred and contempt of the media, and apparent aim of bypassing the mainstream press wherever possible: even ditching the press pool and favouring populist outlets over the NYT in press gaggles. Or is the media bigger than the President .. will indexing theory survive Trump?

Matthew: Indexing theory will of course survive Trump. What we are witnessing in the media is an inability, however, to limit gaper’s block in the sense that the media focus on the more inflammatory and controversial aspects of Trump’s Twitter posts – unfortunately on a daily basis – rather than reporting the policy implications. The media have to report what is news, and Presidential Twitter posts are now newsworthy, but we would argue that we are reaching a point where anything but the meat of the policy implications must be effectively filtered. Until we reach a point where the NYT ignores the inflammatory nature of Trumps Twitter posts, it will be challenging to test indexing theory in the context of the policy agenda setting process.

Ed.: There are recent examples (Brexit, Trump) of the media apparently getting things wrong because they were following the elites and not “the forgotten” (or deplorable) .. who then voted in droves. Is there any sense in the media industry that it needs to rethink things a bit — i.e. that maybe the elite is not always going to be in control of events, or even be an accurate bellwether?

Matthew: This question highlights an omission from our article, namely that indexing theory marginalizes the role of non-elite voices. We agree that the media could do a better job reporting on certain things; for instance, relying extensively on weather vanes of public opinion that do not account for inaccurate self-reporting (i.e. people not accurately representing themselves when being polled about their support for Trump, Brexit, etc.) or understanding why disenfranchised voters might opt to stay home on Election Day. When it comes to setting the policy agenda, which is the focus of our article, we stand by indexing theory given our assumption that the policy process itself is typically directed from those holding power. On that point, and regardless of whether it is normatively appropriate, elites are accurate bellwethers of the policy agenda.

Matthew A. Shapiro and Libby Hemphill were talking to blog editor David Sutcliffe. 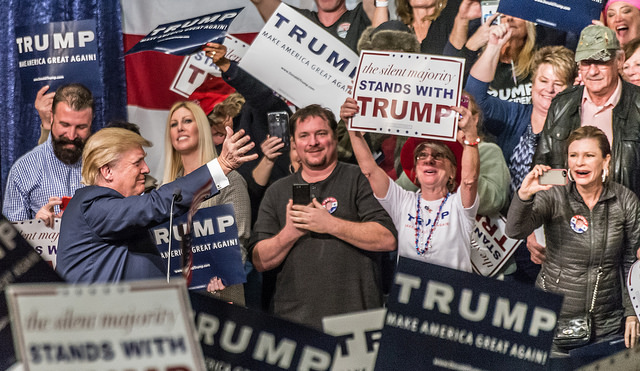